SHOWROOMING: When to Patent Something You DON’T Want to Do 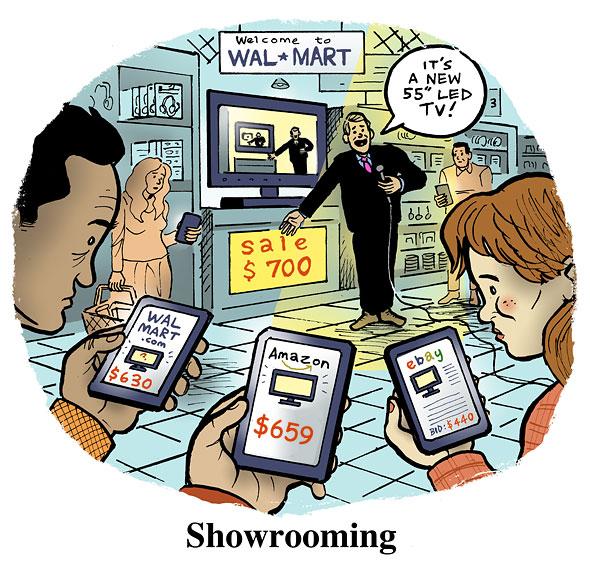 A recent Patent awarded to Amazon is a perfect example of this.

On May 30, 2017, Amazon was awarded U.S. Patent #9,665881, titled “Physical Store Online Shopping Control.” The claims at the end of the Patent, which tell you what the Patent actually protects, describe a method of intercepting a customer when that customer is in a brick-and-mortar store and decides to go online to shop for a better deal.

Checking out products in stores while comparing prices online is a common practice. It has its own name: “Showrooming.” It’s so common, in fact, that an entire new marketing strategy has sprung up, where advertisers target ads specifically to phones whose geolocation shows the user to be within a big box retailer.

With showrooming, you go to a store, look at what you’re interested in, in person, and, if you like it, you go on your phone and look to see who has the best deal on it. Maybe another store has a better price, and you leave to go there instead. On the other hand, maybe an online retailer like Amazon has a better price, and you order online. You might even order online, from your phone, while still in the store.

Over the last few years, this has had a dramatic effect on brick-and-mortar retail sales, while also being a significant source of revenue for Amazon.

Now, let’s get back to the Patent. Amazon’s new Patent covers using a store’s Wi-Fi (which many now offer free) to look up an item on a competitor’s website. When a computer system detects that you are using the store’s Wi-Fi to look up a price, the computer does a price comparison. If the competitor is cheaper than the store, then the computer redirects you to a website of their choosing. You may be in Walmart, trying to look up a price on Amazon, but Walmart will force you to go to the site that it wants you to go to, like Walmart’s own site, or a special deal site, instead of letting you see the lower price on Amazon.

So, why would Amazon want to Patent this? After all, this isn’t the business that Amazon is in. This is pretty much the exact flipside to how Amazon makes money. What’s in it for them?

WHAT IS DEFENSIVE PATENTING?

So, what is “Defensive Patenting?” First, it’s helpful to understand what a Patent IS:  A Patent is a right to EXCLUDE. What does that mean?

When you Patent something, that gives you the right to stop OTHERS from doing what is protected by the Patent. It is a right to EXCLUDE. You can Patent something so that no one else can do it, even if you don’t want to do it either.

That is Defensive Patenting.*

*That is also why MANY companies buy up the rights to Patents that they think are going to compete with their own product lines. They don’t do it to be their own competition; they do it to shelve their competition.

SO WHAT IS AMAZON UP TO?

What is probably happening here is that Amazon is worried that one of their competitors, or all of their competitors, will start doing exactly what is covered by the claims of the Patent. This would take a major bite out of Amazon’s business. So, before someone else figured it out, Amazon decided to Patent it.

Now, if a competitor tries to redirect store customer traffic away from Amazon (at least when it is specifically price matching), then they’re infringing on Amazon’s Patent. Amazon can sue them to stop it.

Amazon did not Patent something that they want to do. They probably have no intention of doing it. They Patented something because they want to make sure that NO ONE ELSE can use it against them.

Thank you for reading. Let me know if you agree or disagree in the comments.